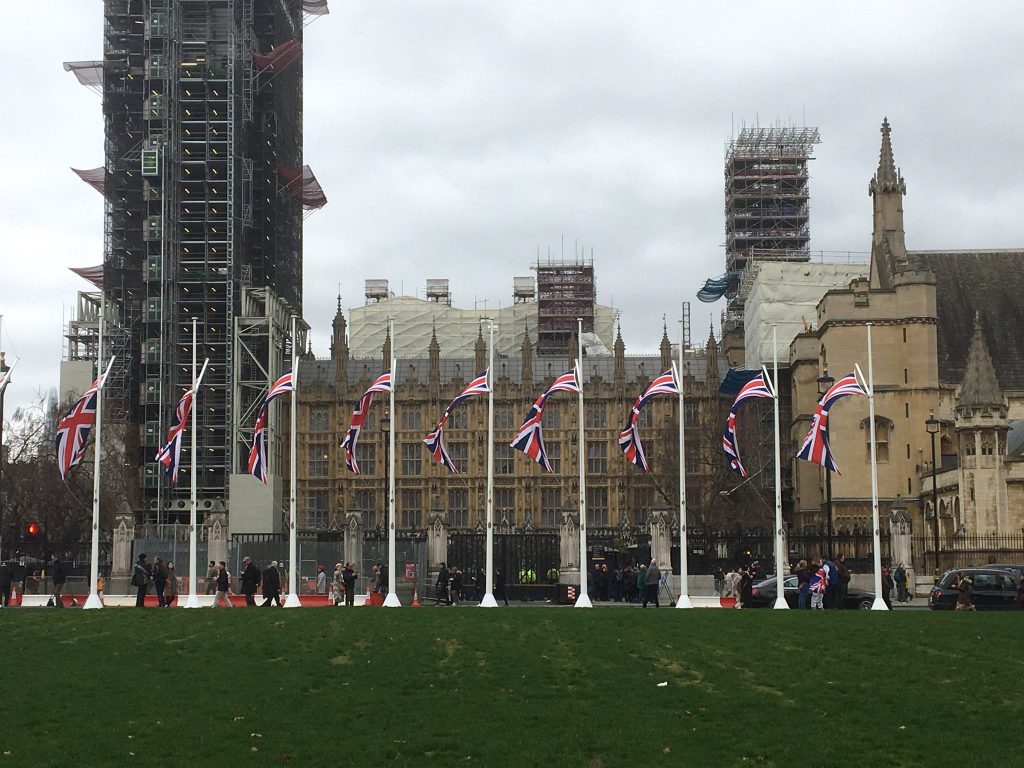 The 31 January has arrived, the day of Brexit. An event has been held in Parliament Square while in Scotland crowds gathered outside the Scottish Parliament to show support for the EU.

This is definitely a country split apart by the Brexit project and there appears to be little sign that a healing process has begun, and it may never begin, especially if the Johnson government fails to stick to its election campaign promises. The pre-referendum promises have yet to materialise and the road ahead is going to be a rocky one, especially with a cliff edge still looming at the end of 2020.

The UK now treads an uncertain path during the transition period which begins on 1 February with trade negotiations set to start in March.

LedbyDonkeys shone once again with their poignant video which was projected onto the cliffs at Dover.

A message to Europe, this morning on the White Cliffs of Dover. Sound on. pic.twitter.com/E3VY8BaGjK

The EU lowered the flag at the European Parliament

What a moment – the UK flag has just been taken down at the EU Council building in Brussels pic.twitter.com/EzvGwwzM1Z

"For a' that, an' a' that,
It's coming yet for a' that,
That Man to Man, the world o'er,
Shall brothers be for a' that."
Burns' internationalist anthem – sung for the opening of the Scottish Parliament in 1999 & again tonight. pic.twitter.com/69yb2mgypa

Huge crowd outside the Scottish Parliament making pretty clear what they think of Brexit. A bit of hope on a sad day! #LeaveALightOnForScotland #indyref2 #Brexit pic.twitter.com/I8pKrq2SdN

The EU Commission building in Brussels tonight (and if you look carefully you’ll see that they do appear to have left a light on for us!) 🏴󠁧󠁢󠁳󠁣󠁴󠁿❤️🇪🇺 pic.twitter.com/KMmUvJsKn4

Turnout for this joyless celebration. pic.twitter.com/X6zetj2iTV

The UK has now officially left the European Union. pic.twitter.com/96edB2ggpn

1/2
Thank you for getting in touch with us at Parsley Box . GB News is a new station that became available to us to advertise on for the first time this month and we placed a small test run of adverts. We have decided to no longer continue advertising on this channel and can

Thanks for getting in touch.

We understand that there are strongly held views on both sides when it comes to this topic.

Because GB News is such a new channel, we need time to fully understand it.

With that in mind, we’ve decided to pause our ad slots pending a review.

Bosch works with its selected media agencies on a global scale to ensure advertising isn’t shown on political channels. We have recently been made aware of an isolated example where our adverts appeared on such channels and we are dealing with this accordingly. Thank you.

Many of you have reached out about our ads showing up on GB News. We had no knowledge and would never have approved it. We work hard to create a positive & safe environment for our advertisers and want the same for our own ads. Without question we’ve suspended our ads from there.

Hi Steve, We proactively manage the placement of our advertising in appropriate & safe environments. For new publications, we wait a few months before deciding to advertise with them. In this instance our advertising has been placed without our permission. We’re addressing this.

1/2 Hi Paul, we have developed a detailed and thoughtful advertising approach, which is driven by 3 principles:
1- We will not seek to affect the editorial independence of publications or channels.

Thanks for taking the time to share your thoughts. We appreciate there are strong views on this topic. With GB News being new, we feel it’s important to take the time to fully understand the channel, so for now we’re pausing the placement of our car and home insurance adverts.

Hi Lloyd, we can confirm that no Boots adverts have run on the GB News channel since its launch. Some suppliers may choose to advertise on this channel, highlighting that their products are sold at Boots. 1/2

As promised…
This is the letter I’ve sent to customers who emailed.
Summary: Ad slots were not planned by us. We’ll monitor any new channels (including this) before running ads and will only advertise if balanced and meets our policies. pic.twitter.com/YInlVubN52

NEW: Ikea says it will not be advertising on GB News again.
That makes it the fifth company to pull out.
See https://t.co/LnUxVMrhEe for more!
cc @StopFundingHate pic.twitter.com/8esBXTWQdc

UPDATE: Grolsch have now joined Kopparberg in pulling their ads from GB News. See their statement sent to us below. Thank you Grolsch! pic.twitter.com/4wMH1byEHy

Thanks for bringing this to our attention. We’ve not planned or purchased advertising with GB News and are investigating why this has happened. This advertising has been paused with immediate effect.

We have just been sent this statement from NIVEA who have pulled their ads too.

Thanks for getting in touch with us, Kate. We have a media partnership which places our adverts across a number of channels and programmes on the network. We hadn’t specifically targeted this channel, but our teams are looking into this today. ^Dave

Thanks for bringing this to our attention. We want to make it clear to everyone that our ad ran on this channel without our knowledge or consent. Kopparberg is a drink for everyone and we have immediately suspended our ads from this channel pending further review of its content

Hi John, thanks for letting us know. Our car and home adverts appear across the TV networks we buy so we haven’t specifically targeted this channel, but we’ve been looking into this with our media agency today. ^Rei